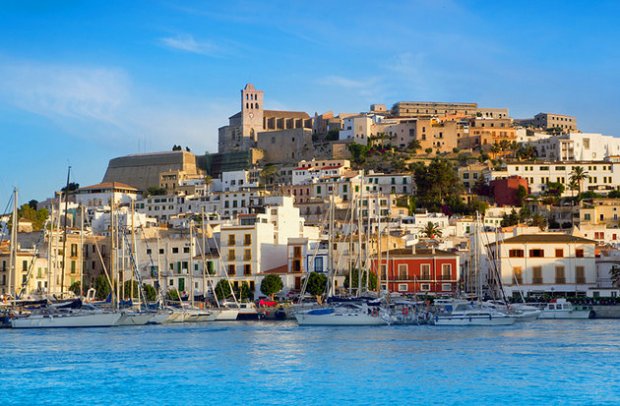 The Palacio Real (Royal Palace) of Madrid is the official residence of the King of Spain although it is only used for state ceremonies. The Royal Palace was built between 1738 to 1755 and King Carlos III took up residence in the palace in 1764.

Pamplona is a city in Navarra, famous for its San Fermín festival held each year from July 6th – 14th. At the heart of the festival is El Encierro, the Running of the Bulls, an activity that involves running in front of a dozen bulls that have been let loose, on a course of the town’s streets.

Protected from strong winds by steep cliffs and islands, La Concha in San Sebastian is said by many to be one of the best city beaches in Europe, let alone Spain. Here you can go surfing, walk along the promenade in search of good restaurants and enjoy the beautiful views of the beach.

The Aqueduct of Segovia is one of the best-preserved monuments left by the Romans in Spain. The ancient aqueduct carries water 16 km (10 miles) from the Frío River to Segovia and was built of some 24, 000 massive granite blocks without the use of mortar. Probably constructed around 50 AD it still provided water to the city in the 20th century.

Situated between Madrid and Valencia, Cuenca is a marvelous example of a medieval city, built on the steep sides of a mountain. The many “hanging houses” are built right up to the cliff edge, making Cuenca one of the most striking towns in Spain, a gem in the province of Castilla La Mancha.

Ibiza is one of the Balearic Islands in the Mediterranean Sea, off the coast of Spain. The island is one of the most popular party destinations in all of Europe. During summer, the island’s population doubles as tourists flock to Ibiza to enjoy the night clubs, beach bars and restaurants.

The Sagrada Familia is a large Roman Catholic church in Barcelona, and one of Spain’s most visited tourist attractions. It’s a design by Antoni Gaudí, a Catalan architect who worked on this project for almost 40 years until his death in 1926. The construction of the basilica began in 1882 and still as yet not finished.

Nestled in the foothills of the Sierra de Guadarrama, El Escorial was the political center of the Spanish empire under King Philip II. Philip appointed Juan Bautista de Toledo as the architect in 1559 and together they designed El Escorial as a monument to Spain’s role as a center of the Christian world. Today it functions as a monastery, royal palace, museum, and school.

The Mezquita (Spanish for “Mosque”) of Cordoba is a fascinating building famous for the forest of pillars and arches inside the main hall. The site was originally a Roman temple, then a Visigothic church, before the Umayyad Moors built the Mezquita. After the Spanish Reconquista a cathedral was built into the center of the large Moorish building.

Part fortress, part palace and part garden the Alhambra is situated on a plateau overlooking the city of Granada in southern Spain. The palace was constructed in the 14th century by the Nasrid sultans. The Alhambra is now one of Spain’s major tourist attractions and many visitors come to Granada just to see the Alhambra.

RT @girlwitpassport: Cause the only thing that could make Barcelona better is the word FREE #barcelonabusturistic #barcelonaaloveuntold ht…