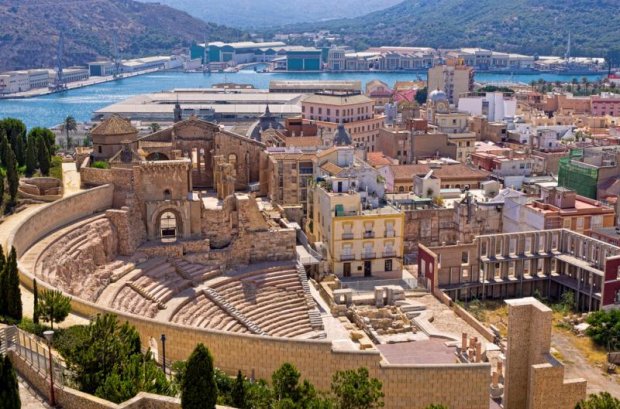 With one of the world’s great natural harbours and rich mineral mines, Cartagena has been a prized location for millennia.

The Carthaginians played a big role in its evolution as an ancient trading hub in the 3rd century BC before it was conquered by the Romans.

You can purchase a multi-ticket to get access to Cartagena’s numerous Roman sites to understand the complicated ancient history of the city.

In the 19th century there was a mining boom, bringing a lot of wealth to Cartagena and transforming the historic centre with art nouveau architecture.

Of all the marvellous Roman landmarks in Cartagena, the 2, 000 year-old theatre should be your first port of call.

It was discovered as recently as 1988 beneath the ruins of the Old Cathedral, which had been destroyed during shelling in the Spanish Civil War.

About two thirds of the theatre’s building material was still on site, which made possible the very detailed restoration you can see now.

In the museum you’ll study the fantastic artefacts discovered during the excavations, among them an altar to Jupiter, a statue of Apollo, inscribed lintels, plaques and also Islamic ceramics from the middle ages.


How do Cryptocurrencies Work and What is it that makes them worth it? naga

RT @RamonxxxnomaR: TBT!?!? 1996, Spain, CARNAVAL, a lot of man like to crossdress, with my cousin Jorge...female bodybuilders...super fun!! htt…