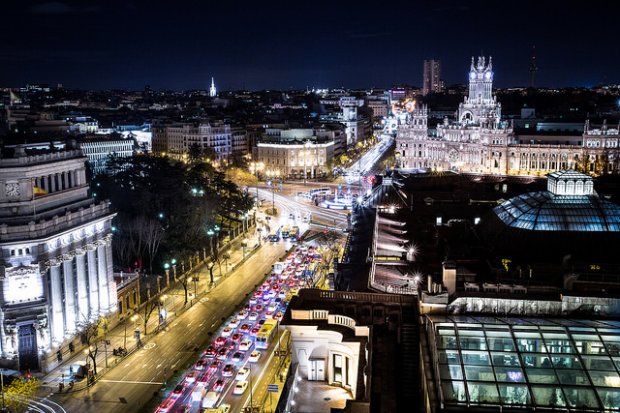 Below you will find the current time in Spain. Contrary to what it should be according to its geographical position, Spain has a 1-hour lead compared to its time zone peers (e.g. Portugal, Ireland, UK, Morocco).

Despite cities like Castellon and London are crossed by the Prime or Greenwich meridian, Castellon lives 1 hour ahead of London. After the conference hold in Washington DC in 1884, the current system of time zones was established. At that time, Spain along with France, Belgium and Luxembourg adopted the time zone that corresponded them – the CET (Central European Time).

However, during World War II the political and civil situation was such a turmoil that in 1942 the spring daylight saving time was not corrected in autumn. The official time remained CET+1.

Because of this historical mistake, Spain is ruled today by Berlin’s time instead of London’s.

On top of this, Spain is divided into 2 time zones:

1. One for the Iberian Peninsula: CET +1

2. Another one for the Canary Islands: CET

It’s common practice in the European Union to apply daylight saving dates. All members change it at the the same time.

What are the daylight saving dates? During these days clocks are advanced during the summertime so that afternoons have more daylight and mornings have less. Typically clocks are adjusted forward 1 hour near the start of spring and are adjusted backward in fall.

The daylight saving time is applied in spring, usually during the last weekend of March. Therefore, on Sunday morning the clocks move forward from 2:00 to 3:00 changing the time zone from CET+1 to CET+2.

And the same applies for the last weekend of October, moving the clock back from 3am to 2am and ending the daylight saving time.

In case you plan to spend your holiday in Spain during late spring or summer, you’ll be able to see the sunset at 9pm or even later. Isn’t it cool?

Practicalities About Time Format In Spain

Official time is always given in 24-hour format (also known as “military time” in the US and Canada). There are no traditional ante meridiem and post meridiem suffixes in Spanish.

In speech, a time given in 24-hour format always is followed by the word horas: el espectáculo comenzará a las 20:30 horas meaning the concert will start at 20:30 (ie. 8.30pm). But these formalities are rarely used.

Instead, when you talk to Spaniards times are given in 12-hours, and those between 1 and 11 are assumed to be post meridiem, past noon, unless someone states the contrary. After midnight, hours are considered de la noche (at night) until five on, which become de la madrugada (at early) before sunrise and de la mañana (at morning) after sunrise. It’s a common mistake to refer to night hours as de la mañana (at morning).

If you want to give more detail about a specific time after noon, it is de la tarde (at afternoon) before sunset and de la noche (at night) after sunset.