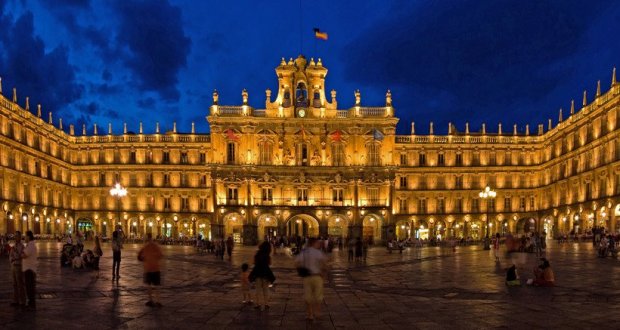 The capital city of the Galicia region in northwestern Spain, Santiago de Compostela is famous as the final destination of the traditional pilgrimage known as Camino de Santiago. This pilgrimage is important to many Christians because it is believed that Santiago de Compostela is where St. James, an Apostle of Jesus Christ, is buried. Today, the city attracts thousands of visitors every year for both its religious tradition and history. The arriving point for most pilgrims is the main square, Praza do Obradoiro. Situated in the heart of the city, this bustling plaza is the scene of many important landmarks, particularly the Santiago Cathedral where the tomb of St. James is located.

Perched on a mountaintop in central Spain, Toledo served as the Spanish capital until the 16th century. Because it was inhabited by Jews, Christians and Muslims for many centuries, the city is sometimes called the “City of Three Cultures.” Today, Toledo is a popular destination for its wealth of historic art and architecture that dates back to the Roman Empire. The best thing to do in Toledo is to get lost amid the medieval streets and admire the old architecture that includes a stunning cathedral, synagogue and mosque.

Cordoba is the capital of the Cordoba province in the Andalusian region of southern Spain. The historic quarter of Cordoba is a maze of tiny medieval streets, plazas and whitewashed courtyards all situated around the star attraction, the Mezquita. Initially built as a mosque, the Mezquita is now a glorious cathedral retaining most of its original architecture. Its forest of columns topped with Islamic-style red and white striped arches serves as a reminder of the glory and importance Córdoba held in medieval times. Other places of interest include the Fortress of the Christian Monarchs, the Street of Flowers, and the Old Jewish Quarter with its charming patios and souvenir shops.

San Sebastian is the capital of the Gipuzko province, located in the Basque country of North Spain off the coast of the Bay of Biscay. This beautiful seaside city is well-loved for its excellent beaches and outstanding culinary tradition. The Old Town features many historic buildings reconstructed in the 19th century after the city was nearly destroyed during the Napoleonic Wars. San Sebastian boasts also some of the best beaches in Europe with the most popular of these being Playa de la Concha, which offers sunbathing and water activities like swimming, kayaking and water skiing.

One of the largest and most important cities in Spain, Valencia is located in the eastern part of the country in the region of Valencia. After redirecting the Turia River, the city constructed its most impressive landmark, a massive cultural and entertainment complex known as the City of Arts and Science. Contained within this complex are several buildings such as a science museum, planetarium and aquarium that are each artistic marvels in and of themselves. Every March, Valencia hosts the Fallas Festival where each neighborhood displays papier-mâché figures of all sizes and colors. At the end of the week, the figures are ceremoniously burned, and the communities party into the night.

RT @DDoodlerStuff: I'd do something set in Spain but no one wants that. Everyone wants stuff happening in Manhattan or Shinjuku. Those are…

@ctcake No have signed but not exchanged contracts yet. Wouldn't mind another week in Spain got any spare places ☺

@Joe Drew: Will never get over the corrupt refereeing in the 2002 World Cup - South Korea vs Italy and Spain 😤Very last on my list of places to visit g

RT @Gangbang_Madrid: We will be doing gangbangs all summer and surely all year in Spain (our private club) in many places ... we look for m…

@DanielJHannan or livestock in EU long distance for slaughter from UK 2 places like southern france and spain, bull fighting or Veal crates?