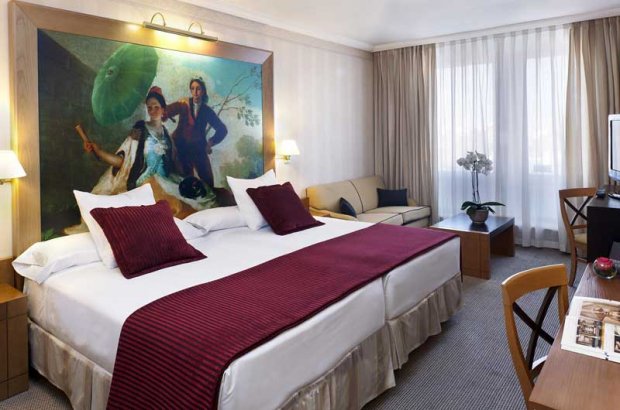 I have to say, this hotel was pretty great (especially compared to the last hotel I stayed at in Europe). Clean, large room, quiet. The hotel staff was super friendly. The food was not the best, but you're in Madrid for Pete's sake, venture out and enjoy the local cuisine. I would definitely stay here again.

My wife and I stayed here one night before flying back from Madrid to Dallas. I felt this hotel was a great value for the size and cleanliness of the room. Even though the hotel was massive, our room was quiet and the hotel staff was very helpful. The free shuttle to/from the airport is also a nice benefit.

Huge hotel, reputed to be the largest in Europe. I believe it because everything in Madrid is enormous. The rooms are modern and clean, the beds are big and the room has a large shower. Don't order the room service. The restaurants have the typical Spanish hours so if you are traveling and need to eat around 5pm or so you will have difficulties. I ordered plain spaghetti Bolognese from the menu and it was cold, pasty, and tasted like school lunch spaghetti. Hotel is far from the center of Madrid and an expensive cab ride to town. You can definitely see the American influence of efficiency and size-even the barely big enough TV, table, rather than desk, instant coffee shows the American stinginess.. There are other airport hotels as well and that's what this is, hotel near the airport. Get in, get out, forget it.

I stayed here the night before I left Madrid and just loved the room and the concierge lounge. The room was large and very comfortable. The lounge was the best I have seen in Marriott hotels and far exceeds anything I have seen in the states. They could use someone at the door to help with luggage in the evenings. The security person was not helpful at all. I would definitely come back to this property. The bed was GREAT and I had the best night's sleep of my trip.

Great hotel! My flight got cancelled so got a room for the day at the Auditorium Madrid.. Room was huge! King size bed, table and chairs at the end of the room, bathroom was bigger than average hotels. Buffet was delicious! Free shuttles to and from Madrid airport.

I stayed in the hotel for three nights for business event. Honestly I can say there was absolutely nothing I could be disappointed. The room was nice, tidy and quiet even though the hotel is close to the airport and highway. (It took around 20 minutes to city center by taxi, aprox. 25 EUR). Hotel stuff were kind and helpful. We had free wifi and it was always available without interruption. There are spacious areas with sofas where you can sit and chat or just relax. Breakfast had a great choice of fantastic food.

Hotel Auditorium is the largest hotel in Europe- it is certainly not the best. Not Recommended. The only reason to stay near an airport is the ability to get to the airport fast. The driver of the shuttle bus decided to skip out on a scheduled pickup, and let about 10 of us waiting at the curbside for about 40 minutes. Some took taxis, others waited, but only barely checked in. I approached a member of the Staff, a man wearing a jacket that said "Aventus" who said he worked for the hotel and was standing with us at the curb. I asked him to call the the driver in English, since I can only say a few words in Spanish. This apparently was deeply hurtful to this very sensitive man and he said "it is not my job to speak English" and he turned his back, walked away and did nothing to help the ten stranded people.I am a world traveler, and expected an international hotel such as this to speak English and want to correct the situation. I was wrong and was given only attitude. Be prepared to roll the dice at Hotel auditorium! Maybe the shuttle will come, maybe it won't and if anything goes wrong, you won't be helped.

@Drama llama: When Princess Maria Theresa of Spain was betrothed to Louis XIV of France....

RT @RoyalUniverse: Maria Theresa of Spain, daughter of Philip IV of Spain and consort of Louis XIV of France, died on 30 July 1683

RT @JaneHoodless: Maria Thérèsa of Spain–died OTD 1683–causing Louis XIV to say of his double cousin & wife: "This is the first trouble she…