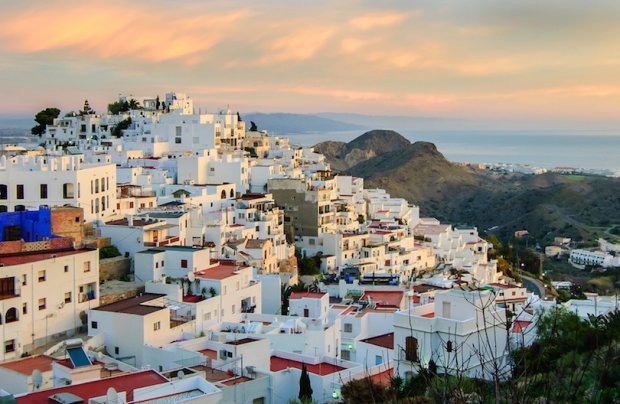 To see what Spain might have looked like in medieval times, there is no better destination than the town of Besalú. Located in Catalonia, Besalú is a completely walkable town packed with historic attractions. Don’t miss the magnificent and beautifully preserved Romanesque bridge that spans the Fluvià River and dates back to the 12th century, the historic Jewish synagogues and the 11th century Church of Sant Pere. Be sure to walk across the bridge, which is closed to vehicle traffic, to take a few photos of the quiet, medieval town from this spectacular vantage point.

On the Spanish island of Mallorca, in the heart of the Serra de Tramuntana Mountain Range, you’ll find the charming village of Deià. The village has long been popular with expats who flock to the scenic spot for steep cliffs overlooking the Mediterranean Sea as well as countless olive groves. Literature lovers will appreciate that Deià was the home to author Robert Graves, whose residence is now open to the public for tours. Deià also boasts a beautiful coastal inlet called Cala de Deià that is only accessible by foot.


In the shadow of the Pyrenees Mountains, there is a medieval town called Aínsa. A highlight of a visit to this town is undoubtedly the Aínsa Castle, which is found at one end of the Plaza de San Salvador. Parts of the castle are from the 11th century, although much of the building comes from the 16th century. Two of the towers of the castle itself have been transformed into museums: the Ecomuseo, where you can learn more about the Pyrenees, and the Espacio del Geoparque de Sobrarbe.


Once a small fishing village on the northern coast of Spain, Cudillero is now a popular spot for tourists who want access to the beach and great seafood without the crowds. Overlooking the Bay of Biscay, you’ll be able to see beautiful buildings like the palace ground of the Fundacion Selgas-Fagalde and the historic church called Iglesia El Pito. Scenery is unparalleled in Cudillero, and some of the town’s most picturesque spots include the overlook of Cabo Vidio and the blue waters at the beach called Playa del Silencio.


Where the Fluvià and Toronell Rivers meet, a basalt cliff was formed. On this crag, which was created thanks to ancient lava flows, an entire town is perched. When you approach Castellfollit de la Roca, stop and take some photos, because the best views are actually from below the town looking up. Once you’re in the basalt cliff town of Castellfollit de la Roca, take time to explore attractions like the Pont Trencat, or Broken Bridge, and the 13th century Sant Salvador Church.


In the province of Navarra in Northern Spain, the ancient town of Olite stands. History declares that Olite was founded in the seventh century by the Visigoths, but it truly came to life in the 12th century. The spectacular Palacio Real de Olite, a Gothic castle from the 13th century, was once the seat of Charles III of Navarre and is now open to the public. While in Olite, you can also visit the Iglesia de Santa Maria la Real, do some wine tasting at the Museo del Vino or learn about Spanish medieval history at the Galerias Medievales Museum.


Morella is an ancient walled city found in the province of Castellon. Architecture and history are the main attractions in Morella, and you won’t want to leave without seeing the Morella Castle, the Gothic Santa Maria la Mayor Basilic Church with its incredibly ornate interiors or the ancient Morella Walls. As a delicious treat, head to a bakery for the local culinary specialty known as flaons, or sweet pastries filled with cheese. Morella can also serve as a home base for exploring the surrounding Maestrazgo Mountains.


The small town of Casares in the province of Málaga is known for its whitewashed buildings, designed in the Moorish style, that hug the cliffs overlooking the Alboran Sea. If you’re an architecture buff, you’ll also want to see the stunning Casares Castle, which was built in the 13th century, as well as the Church of La Encarnacion. The area is popular for horseback riding, and you may want to join a group riding horses right on the beach. There are also several golf courses in the area perfect for teeing off and soaking up the Spanish sunshine.


The town of Alquézar is found in Aragon, Northern Spain, and serves as the region’s hub for outdoor recreation. Just a few hundred residents live in Alquézar, which is situated on a limestone outcropping and dates back to the 11th century. Today, a main reason to explore Alquézar is to admire the historic architecture, visit the collection of artifacts at the Colegiata de Santa María la Mayor Museum and get active outdoors. Popular pastimes include trekking along the Río Vero Canyon, canyoning, birdwatching and even quad biking.


In the province of Girona, and in a coastal region known as the Costa Brava, is the beachfront town of Cadaques. This town is perhaps best known for being the home of painter Salvador Dali, and art fans can still visit Dali’s House, which is now transformed into a museum. The tiled walkways of Cadaques lead you between charming seafood restaurants and local boutiques, but the main draw to the town is the gorgeous beach and the blue waters of the Mediterranean Sea.

This small town in Cádiz is so famous because its many building are, quite literally, built underneath a rock. Located along the a river gorge of the Rio Trejo, Setenil de las Bodegas was built with the gorge’s rock serving as an external roof wall. For thousands of years, locals have lived in caves in the region, and this village is merely an extension of that. You’ll definitely want to dine in one of the cafes where the outdoor patio is shaded by an enormous cliff, something you can only do in Setenil de las Bodegas.


In Malaga, there is a small mountain town called Frigiliana. Most of the homes are built in the traditional Andalucian style, and even the narrow streets are whitewashed. Frigiliana is the perfect place to stroll from spot to spot, keeping an eye out for the tiled signs explaining the history of the town. Ctra Circunvalacion is the heart of this small town, and it is where you can shop for food, souvenirs or the handicrafts sold weekly at the Thursday market. From the overlooking balcony at Ctra Circunvalacion, there is an excellent view over the countryside towards the sea at Nerja.

@can't think of anyth: Some days when I listen I think Sketches Of Spain might be Miles best album

@Ali Parker: Kind of blue is easily my favorite jazz album ever. Sketches of spain is a close second.

@Jared: Today I'm going to cook mussels in a red sauce while listening to Sketches of Spain