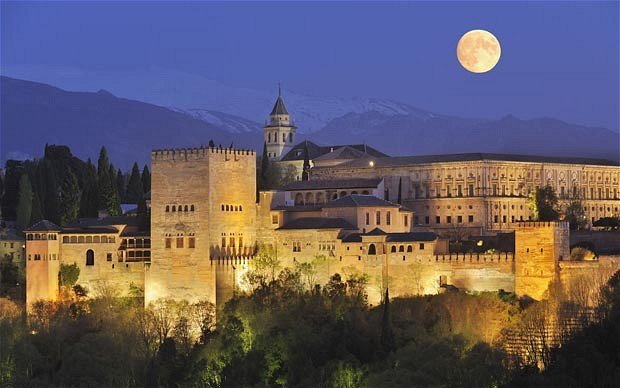 For most tourists, the Alhambra is an essential pilgrimage and, as a result, predictably crowded. At the height of summer, some 6000 visitors tramp through daily, making it difficult to pause to inspect a pretty detail, much less mentally transport yourself to the 14th century. Schedule a visit in quieter months, if possible; if not, then book in advance for the very earliest or latest time slots.

The Alhambra takes its name from the Arabic al-qala’a al-hamra (the Red Castle). The first palace on the site was built by Samuel Ha-Nagid, the Jewish grand vizier of one of Granada’s 11th-century Zirid sultans. In the 13th and 14th centuries, the Nasrid emirs turned the area into a fortress-palace complex, adjoined by a village of which only ruins remain. After the Reconquista (Christian reconquest), the Alhambra’s mosque was replaced with a church, and the Convento de San Francisco (now the Parador de Granada) was built. Carlos I (also known as the Habsburg emperor Charles V), grandson of the Catholic Monarchs, had a wing of the palaces destroyed to make space for his huge Renaissance work, the Palacio de Carlos V. During the Napoleonic occupation, the Alhambra was used as a barracks and nearly blown up. What you see today has been heavily but respectfully restored.

Entrance is through the 14th-century Mexuar, perhaps an antechamber for those awaiting audiences with the emir. Two centuries later, it was converted to a chapel, with a prayer room at the far end. Look up here and elsewhere to appreciate the geometrically carved wood ceilings. From the Mexuar, you pass into the Patio del Cuarto Dorado. It appears to be a forecourt to the main palace, with the symmetrical doorways to the right, framed with glazed tiles and stucco, setting a cunning trap: the right-hand door leads only out, but the left passes through a dogleg hall (a common strategy in Islamic domestic architecture to keep interior rooms private) into the Patio de los Arrayanes (Court of the Myrtles), the centre of a palace built in the mid 14th century as Emir Yusuf I’s private residence.

Rooms (likely used for lounging and sleeping) look onto the rectangular pool edged in myrtles, and traces of cobalt blue paint cling to the muqarnas (honeycomb vaulting) in the side niches on the north end. Originally, all the walls were lavishly coloured; with paint on the stucco-trimmed walls in the adjacent Sala de la Barca, the effect would have resembled flocked wallpaper. Yusuf I’s visitors would have passed through this annex room to meet him in the Salón de los Embajadores (Chamber of the Ambassadors), where the marvellous domed marquetry ceiling uses more than 8000 cedar pieces to create its intricate star pattern representing the seven heavens.

Adjacent is the restored Patio de los Leones (Courtyard of the Lions), built in the second half of the 14th century under Muhammad V, at the political and artistic peak of Granada’s emirate. But the centrepiece, a fountain that channelled water through the mouths of 12 marble lions, dates from the 11th century. The courtyard layout, using the proportions of the golden ratio, demonstrates the complexity of Islamic geometric design – the varied columns are placed in such a way that they are symmetrical on numerous axes. The stucco work, too, hits its apex here, with almost lacelike detail.

Walking counterclockwise around the patio, you first pass the Sala de los Abencerrajes. The Abencerraje family supported the young Boabdil in a palace power struggle between him and his own father, the reigning sultan. Legend has it that the sultan had the traitors killed in this room, and the rusty stains in the fountain are the victims’ indelible blood. But the multicoloured tiles on the walls and the great octagonal ceiling are far more eye-catching. In the Sala de los Reyes (Hall of the Kings) at the east end of the patio, the painted leather ceilings depict 10 Nasrid emirs.

RT @ANC_USA: Remember that airports in #Catalonia are also managed/controlled from Madrid. (Needed yet one more reason for #Catalans to qui…