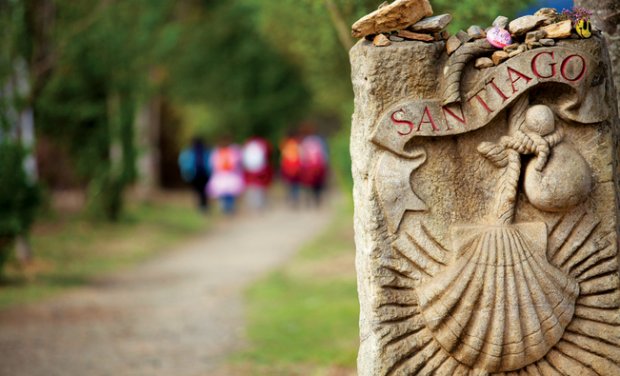 Spilling over the Pyrenees from France into Spain, the network of trails that make up the Route of St. James—or El Camino de Santiago—converges at the cathedral of Santiago de Compostela. For more than a thousand years, pilgrims have trekked over the high plains of Castilla and the hills of Galicia, some to honor the Apostle James; others in the midst of their own spiritual journey. The route has given rise to historic and religious sites that represent centuries of European architecture at its best. Set out from Pamplona to discover the longest pilgrimage route in Europe, experiencing the most picturesque and poignant sections of this UNESCO World Heritage site on foot.

Arrive in Pamplona and transfer to our historic hotel, once a haunt of Ernest Hemingway. After an orientation, set out on a walk through the old city and the streets made famous by the running of the bulls. Meet up for a welcome dinner tonight.
Gran Hotel La Perla (D)

Descend out of the foothills of the Pyrenees to La Rioja, one of Spain’s most celebrated wine regions. In the capital city of Logroño, we get the first stamp in our “credencial” at the Plaza de Santiago. Then begin our journey along El Camino, walking through the vineyards to the village of Navarrete. In the afternoon, visit the Yuso and Suso monasteries of San Millan de la Cogolla, a World Heritage site considered the birthplace of the Spanish language. Stop for a wine tasting at a local bodega before settling into our hotel. (8 miles hiking, 4 hours)

RT @ChrisGarran: Stopped by airport to send off our Nexus group who will be trekking the Camino de Santiago in Spain. A great educational j…

RT @markwestwriter: “All Roads Lead Home” is the story of one man’s journey to take back by walking 475 miles across Spain on the Camino de…

RT @Mattheknifer: I think something I really wanna try is the Camino De Santiago and just walk across Spain #roadtrip