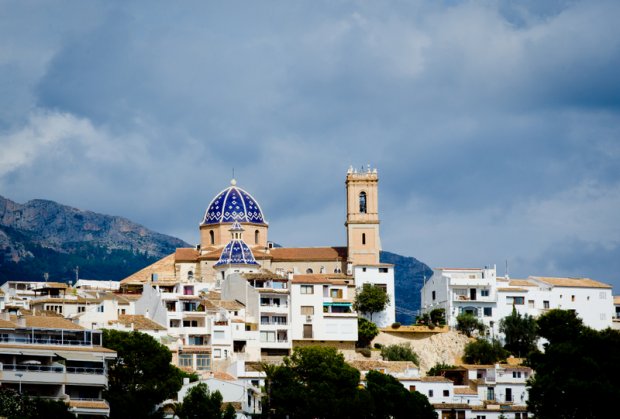 Altea is without doubt one of the most charming towns to be found on Spain’s ‘White Coast’, located in the region of Alicante on the Costa Blanca. The town is just 11 kilometres north of Benidorm, yet the two resorts are worlds apart. Altea is similar to other Costa Blanca towns in that it has a new and an old neighbourhood. The old section is perched on top of a hill from where you will find really spectacular views.

All in all Altea is a pretty town, popular with both holidaymakers and those fortunate enough to be able to live in the area; it has a slowly growing community of multinational expatriates.

History
The name Altea derives from the Moors who conquered the region and named it Althaya, meaning health to all.

About town
Altea has excellent amenities, however, if you want all-night discos and bright city lights on your holiday, give Altea a miss. This town is a holiday haven for the more discerning tourist who will be captivated by its medieval cobbled streets, its picture book old quarter and the delights of its palm-fringed seafront promenade.

The ascent to the old section along steep slopes and stepped streets reveals a broad horizon at every turn and extends along the entire La Marina region. The silhouette of the Peñon de Ifach on one side and the Helade range on the other, frame the view of the sea, with the ever present gulls sweeping low over the town.

Excursions
Eight kilometres from Altea, heading inland, is Polop, a small town surrounded by orchards and pine groves, which is highly recommended for those who seek peace, quiet and cool summer nights.

From the Via Crucis which presides over the town, you can obtain superb views of the surrounding valleys, which owe their present appearance to the work of the Morisco farmers from many years ago.

Benidorm makes a great day out with its eclectic collection of bars, playgrounds and beaches and ferry rides to the Balearics can be made from nearby Denia.

Cuisine
As with most of this region, traditional rice dishes
are what you will find most on the Spanish menu. For international cuisine, Benidorm is just a short drive.

Climate
Altea enjoys a privileged location and an excellent mild climate, with an average year round temperature of 18-20° C.

@kkungswife @antonio_altea_ @2gay2lift Yes, im from Mexico and sometimes I get confused with slang from countries like Argentina and Spain.